USAF-1951 test charts (also called USAF-1951 test targets) get their name from the designers and the design year: “United States Air Force 1951”. The targets are available in various finishes , for example chrome on glass.

Here is an example of how they look enlarged (source: Wikipedia) 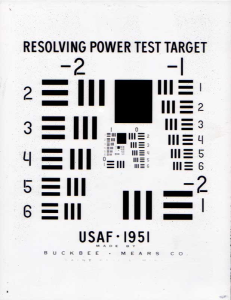 The targets consist of “groups” of 6 “elements” each. The group numbers at the top of the group, the element numbers are located at the sides of the groups.

When we enlarge the center of the above chart, we get: 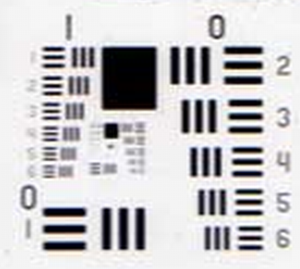 so in our case the width is

That’s the so-called object side resolution, as obviously details of this size on the object still can be recognized.

At first glance it might be a bit surprising that neither the focal length nor distance is part of the formula. But they are in fact included in the calculation, as they influence the magnification. For example the doubled distance corresponds to half the magnification.

To avoid having to use the formula again and again, here is a table (resolution in micrometer):

Resolution of the USAF1951 Target in um