(=EFL)
Distance between the principal point P2 and the focal point F2.

Don’t confuse with the back focal length (Back Focal Length BFL)!

describes, how much larger an image sensor is displayed on a monitor.

The most common entocentric lens is in our eyes.

= image of the physical aperture of the lens , as mapped by the lens elements between aperture and object. For front-aperture-lenses, entrance pupil and front aperture are identical.

This is the apparent opening that we see as humans when we look towards lens from the object side. 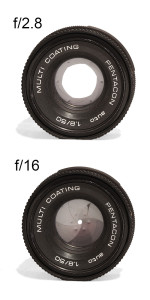 Diameter and position of the entrance pupil influence the F-number and thus the light sensitivity of a lens and also the angle of view.

The diameter of the entrance pupil alone does _not_ describe the F-number (=measure for the ability to collect light)! Only comparison lenses of the _same_ focal length allow to directly decide which Lens has the lower F-number

Rays from the object point directed to the center of the entrance pupil are called “chief ray”.

Here a 3D Graphics that shows in yellow the light from the Objetpoint that heads the entrance pupil and on its way hit’s the front lens of the system. Move the green point.

The example above is over emphasized. Here a more realistic example with a front iris, which also acts as a entrance pupil:

equal area lenses are a type of fisheye lenses

Equal area lenses use a image mapping function of the type

= image of the physical iris of a lens, as seen through the (image side) lens elements. 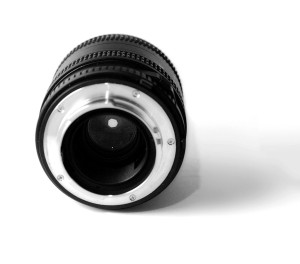 Here we also see the Chief Ray Angle = CRA between the chief ray and the optical axis. Some sensors like for example from E2V accept only angles between 5 and 20 degrees, say != zero.

If (image side) CRA==0, we call the lens “image side telecentric”.