The image produced by a lens can be in front or behind the lens.
It can be smaller or bigger than the object.
Of course we want images of trees to be smaller than trees.
Image of microscopic details we of course want to be larger than the details.

The “Gauss lens equation,” as it is known, goes like this:

It can be solved for focal length, object distance and image distance.

We may find the focal length by this equation:

We may find the object distance by this equation:

We may find the image distance by this equation:

Interpretation of the lens equation

What can be derived from this formula?

(but subtract the distance of the principal points from X)

holds. Most calculators don’t care (including ours), As a result, anytime larger viewing angles are involved, the results are essentially a “informed guess.” 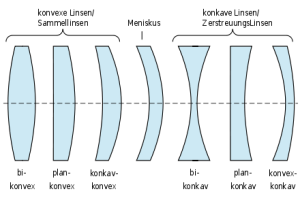 See also:
How to tell whether a lens singlet is converging or diverging?

The formula (at the bottom of this post) shows for thin, spherical lenses the relationship between shape and power.

Be d center thickness of the lens element.

be the radii of the spheres that describe the surfaces.
Keep the sign conventions for radii in mind, however!

f be the focallength of the lens and
D be it’s Power, 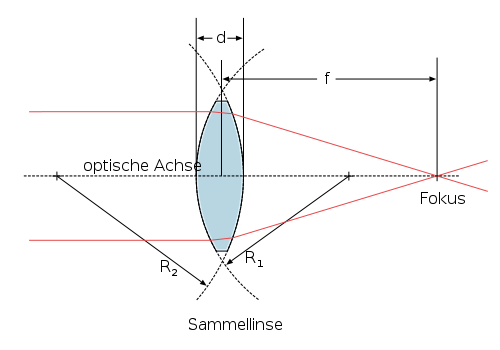 For spherical optical systems holds generally in the paraxial region:

Is the surrounding medium air, we get (because

Are the lenses also thin (idealizing

), the formula simplifies to
Lensmaker’s formula:

Light that we can see (“visible light”, “VIS”) is a small part of a spectrum of a thing called “electromagnetic radiation”, distinguished by something we call “wavelength”.
As the wavelength varies in the visible spectrum, the light appearantly changes color from violet to red.

There are no actual boundaries between one range of wavelengths and another. So numbers associated with a certain range are only approximate.

If we explore the spectrum from long wavelengths to shorter wavelengths, we meet :

Rings of  M12x0.5 female thread to fix s-mount lenses using the principle of the counter nut.