S-mount lenses are either used in special holders, or with adapters or in C-mount CS-mount cameras.

Note:
Like with C-mount, CS-mount and F-mount lenses diameter and thread pitch are fixed.
But different from these the back flange length (distance from the mechanical stop of the lens to the sensor) is NOT standardized.
This can lead to mechanical problems with filters mounted between the lens and sensor.

The sagittal plane through a point is a plane perpendicular to the tangential plane trough the point, containing the point and the center of the entrance pupile.

Perpendicaular to it is the tangential plane.

Normally, the focus plane is 90 degree to the optical axis. This is due to symmetry reasons.
A problem arises when two objects have so different distances, that they can not be focussed at the same time.

Theodor Scheimpflug had a genius idea : lets tilt the camera!

Then all point in the A-B-plane will be focussed!

Just tilting the camera of course is not enough, to get a focussed image. The Gaussian focus equation also must be satisfied.
The Gauss equation is however equivalent to the second Scheimpflug priciple.

For a theoretical “thin lens” (=of virtual length 0) , it’s clear where this plane is. For the exact location in a real world lens, see below.

For a mind game lets keep the sensor plane and the object plane fixed and non-parallel. This defines a shared common line in 3D space. Through each line in Space there is an infinite number of Planes, containing it.
Obviously not all can be the plane of best focus.
Say:

The first Scheimpflug principle is just a necessary condition, but not a sufficient condition to get a focussed image of a tilted object plane on the sensor.

In general the lens is tilted, but the image not focussed.
However, as soon as wwe use the lens focus mechanism, the first Scheimpflug principle is not satisfied any more, we would have to tilt the lens a little to satisfy the first criterion, but then the image is not focussed any more, etc.

The second (sufficient) condition can be the

But instead of the Gauss focus equation we can use the

Situations & Applications where to use the Scheimpflug principle:

The following interactive drawing is just for illustration purposes!

Usage: First place the object center (the green dot, the spot where the optical axis meets the object) at a local you like , for example at 60 on the x-axis.
Them move the lens (the other green dot) to a location where it’s possible to place the camera-lens position.
The interactive graphic keeps the optical axis in the center of the lens and maps the edges of the sensor to the wanted object plane.
The magnification if measured perpendicular(!) to the optical axis.
Keep in mind, that on your monitor you’ll see a trapezoid / trapezium)

What is the MTF of a sensor?

For an ideal pixel the shape is square and the fillfactor (= percentage of the photons that were intended for that very pixel also reaches this pixel) is 100%.

After the pixel shape has been convolved with the Dirac curve we have to convolve an 2D array of such convolutions with a 2D rectangle curve that has the sensor shape.

We are just interested in this curve in the range from x=Zero to One , where x is measured in cycles per millimeter.

Convolution with the Dirac function, we get a curve sampled at the point of the Dirac Pulses.
If we finally convolve this curve with the rectangle curve of the sensor, then instead of a mere sampling, we get a more “filled” curve .’

The Nyquist frequency is at 1/2 cycle per pixel. For this value of x, the function has a value of 60% (=0.6).
When a sensor documentation says that the sensor MTF is at over 50%, it means that it is at 80% of what it possible by physics.

Trouble cause the function values for x beyond the Nyquist frequency, for x between 0.5 and 1.
These generate alias frequencies.

If in the combination of a lens and a sensor the lens is the optical low pass filter the function is very predictable and few alias frequencies occur.
If the pixels however have about the size of the sampling frequency of the Dirac Function, and therefore of the pixel size, Then die difference between the optical MTF and the sensor MTF generate the alias frequencies above. Frequencies are generated in the resulting image that can not be found on the object side.

In the Lensation setup for lens testing, the MTF curve is supersamples by  factor 4. By this the sinc curve is stretched in x direction by factor 4 and the first time the curve is zero is not at 1 cycle per pixels, but at x0 = 4 cycles per pixel. The Niquist frequency stays in the center between zero and x0, say at 2 cycles per pixel. By stretching the curve this way, the value of the MTF function at Nyquist is as high as Factor 4 times more left before, say, at about 90%.

When we combine the lens and the sensor, then their MTZFs are multiplied.
Because the function value at at the (new) Nyquist frequency is about 90% , only 10% of the MTF is lost due to the sensor.

So this is not an explanation why actual MTF curves of lenses are significantly lower than design curves … at least not by a factor of two.

Sensors of different shapes and sizes are used in image processing and surveillance technology.

On the other hand, the sensor size differs, that is described by the sensor diagonal

For the data sampled in digital systems two conditions hold:

If the conditions are not met, is for example the sampling frequency not minimum twice the cutoff frquency, there will be components in the spectrum that are not given in the signal.
If the lens resolution is for example higher than the pixel pitch’s frequency. we get Moiré effects. Yes, lenses can be “too good”.
See https://www.optowiki.info/faq/why-can-color-cameras-use-lower-resolution-lenses-than-monochrome-cameras/

This effect is called aliasing and results from mirroring of frequencies above into the frequencies below the cutoff limit..

The cutoff frequency is called „Nyquist-Frequency“.

In Optics the Nyquist-Frequency equals onle line per pixel = half a line pair per pixel.

At the Nyquist-Frequency the MTF reaches Zero. We don’t have contrast then.

The cutoff frequency depends on the FNumber and the wavelength.

This contrast is then reachend over a range of 4 pixels.

Lets say we have a sensor with 2.2um pixel pitch.Then the Nyquist frequency is 1/2 line pairs per Pixel.

there we have 0% Contrast.

In order to achieve similar optical formulas across various authors, an agreement on some sign convention is necessary:

The z-axis of a system is the optical axis.
As usual we assume thet the light passes from left to right through the lens elements.
Initially the light travels from -z to +z

The first optical surface then has the radius R1 and the second optical surface has the Radius R2, where infinit values signal plano surfaces (blue colors in the graphic).

If the light first meets the optical surface and then the center of curvature then the radius has a positive sign, (green color arcselse a negative sign (red color arcs).

signs of refraction indices are negated after a reflection.

stereographic lenses are a class of fisheye lenses

Example of a Stereographic image : 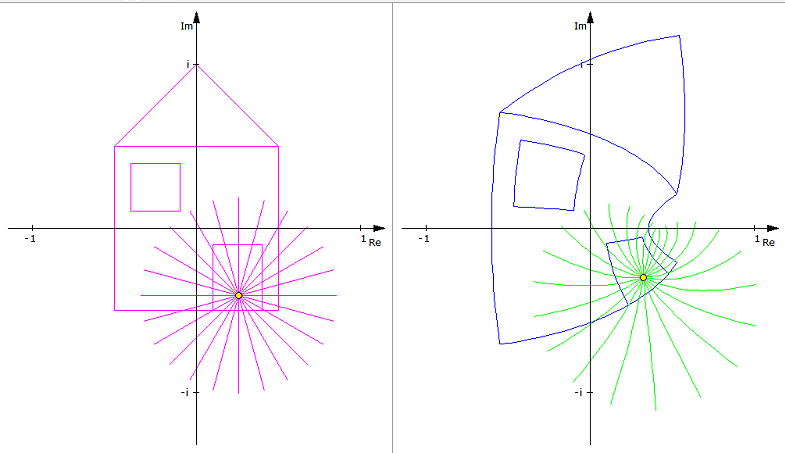