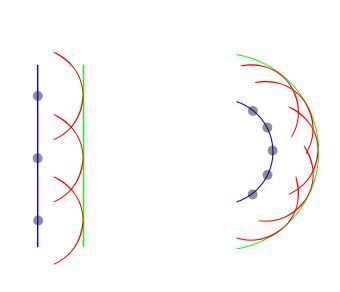 Wavefronts stay after reflection perpendicular to the propagation direction of the light.

number of wavelengths per cm

Entocentric lens with a focal length smaller than the sensor diagonal, eg an f = 6mm lens on a 1/2″ sensor (the sensor size has 8mm).

When we use the word “wide angle lens”, it must be clear what sensor is used.

The same lens can, depending on the sensor, be wide-angle, telephoto lens and normal lens.

Distance between mechanical front of lens and object.

When you insert distance rings between camera and lens you might have noticed that the image gets darker and the field of view gets smaller.
As the lens was not changed, the F-number of the lens still must be the same. The darker image and the reduced field of view are described by the working F-number, also called effective F-number.

is only defined for objects at infinite distance.
The sensor has according the definition of the focal length exactly the distance “focal loength” from the principal plane when the lens is focussed to infinity.

When an object comes closer, it’s image moves in the same direction. It moves further away from the principal plane.

To keep the object focussed, the distance of lens and sensor must be increased. This is equivalent with adding distance rings reagrding the infinity position of the lens. As result the images gets darker the field of view gets smaller , the therefore the magnification

the magnification for this focus distance and

is the pupil magnification.

For an objective used for a 1:1 mapping holds:

The effective F-number can also be described by the height “delta” of the inserted distance rings:

From this we can derive a third way to calculate the working F# :

From above we learnt

With the length of the needed distance rings delta

For a lens of Working F#