When you look at the lens from the front you see an aperture. 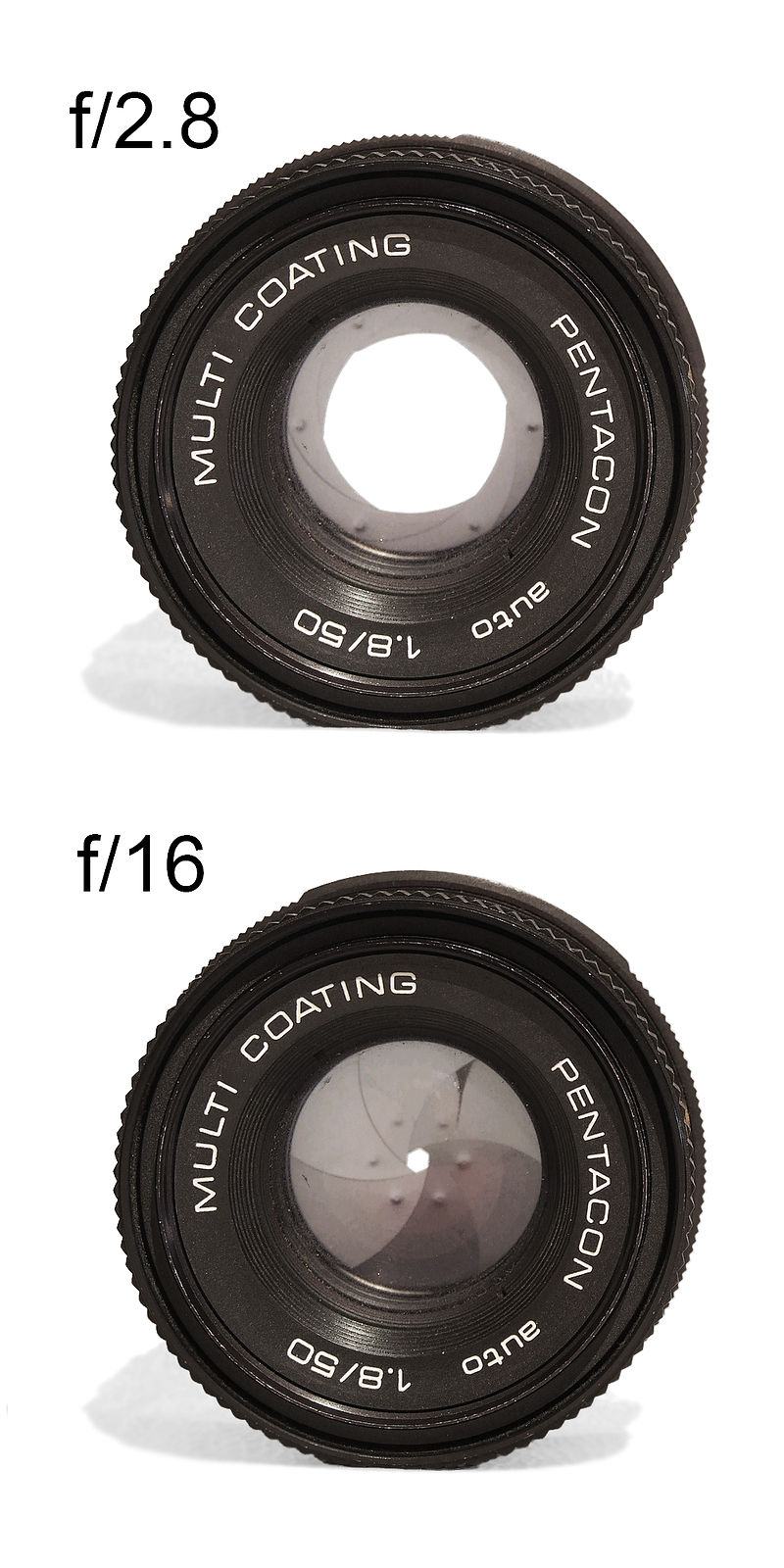 Many people think what they see is the mechanical iris, but instead it is just “the image of the iris as seen through the object side lenses”, or short “entrance pupil”. 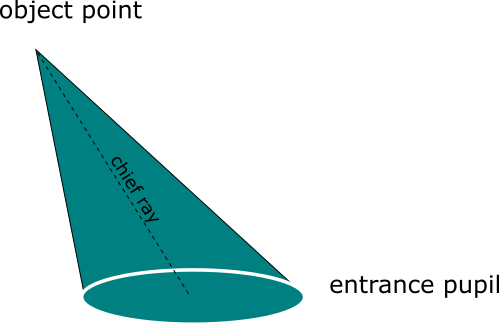 A (non mirror) object point sends light in all directions .. (proof: both of your eyes can see the object point, as also all people in the room in a suitable position can see it).

If by at this position there is a lens, also ALL points of the front surface of the lens will get light from this object point.

Not all light will reach the pixel though … only the light that fits through the entrance pupil.

The above holds for ALL object points.

This means however that ALL object points send light in all directions and SHARE the entrance pupil!!!!
This means, btw, that if there is a little dust particle or mini air bubble on the front lens that is 1/1000 of the entrance pupil area, it will reduce the brightness of ALL image points by 1/1000 , say, it’s not visible on the sensor / monitor.
That’s why inspecting lenses with a microscope is, say, less useful 🙂
The axis of this (elliptical (!) ) cone , say, “the line between an object point and the CENTER of the entrance pupil” has a shorter name : (object side) chief ray.

This (object side) CRA is used to define viewing angles :

When you look at the lens from the image side , you see this : 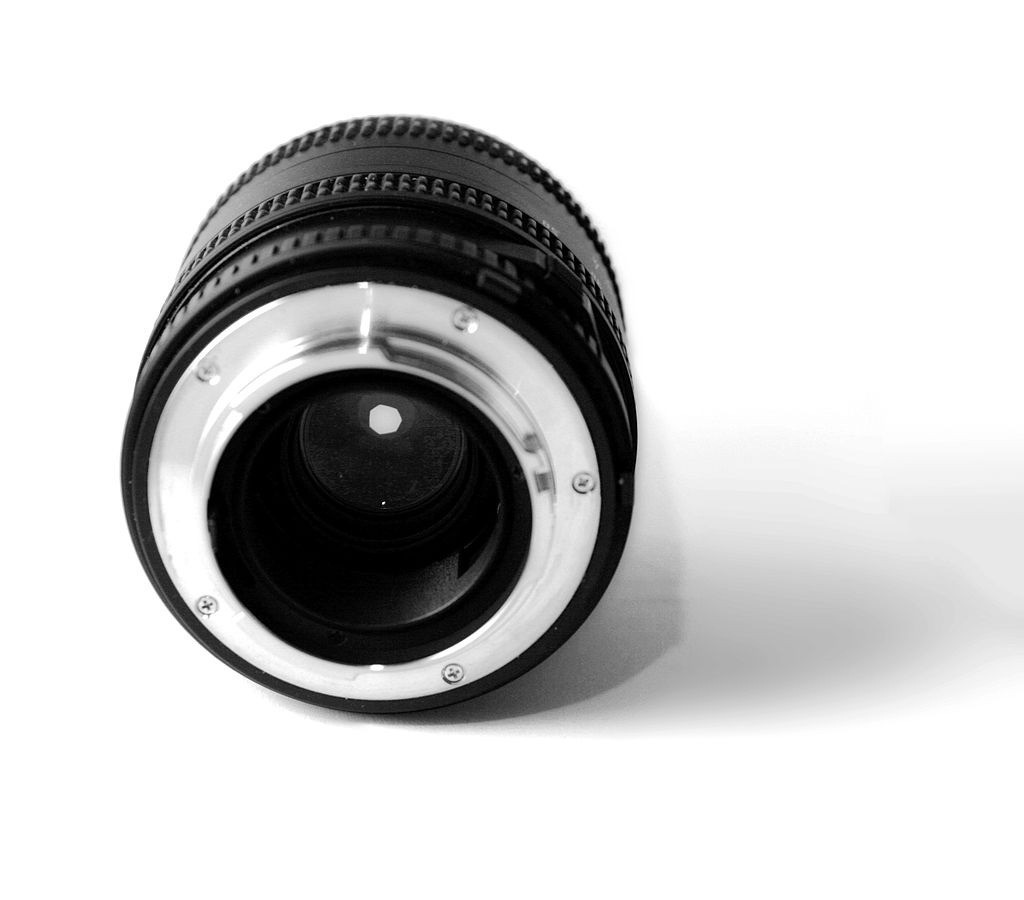 We see an aperture. And again its not the iris, but “the image of the mechanical iris as seen through all glass elements on image side”
or short the “exit pupil”

You can guess the rest :
The light for each pixel will use the WHOLE exit pupil and concentrate on one circle (called Airy disk)

If there is a sensor and the airy disk is small enough, you see a focussed pixel.

If you have a look at the drawings one thing is important :

The chief ray connects the object point with the center of the entrance pupil. But from the object point also light with steeper and shallower angles than the CRA will arrive at the pixel !!!!

Which angles exactly occur is objeviously determined by the diameter of entrance and exit pupil, and we remember that these are IMAGES of the physical iris
With the physical iris its images, say, the pupils, and thius the off-chief-ray-angles get smaller.
Lets look for a moment at a lens that has CRA 0.
This means “the maximum angle between the optical axis and the ray from the entrance pupil center to each pixel” is zero.
If the maximum is zero so all other values must be zero too.
Such lenses are called (object or image side) telecentric lenses, and the only possible explanation how all rays from the center of pupil can arrive at zero degrees is that the pupil is at infinity !
Most people say, telecentric lenses accept only parallel light.
This is wrong.

Telecentric lenses have (like all other lenses) an entrance and exit pupil of non zero diameter (else no light would arrive at the pixel).
The maximum image side angle ( larger than the CRA, btw. !!! ) is given by the angles from the rim of the exit pupil to the pixels.
So even for lenses with CRA 0, light arrives at larger off axis angles than zero, say, at larger angles than the CRA.
If the CRA is non zero .. for example (image side) CRA=15°, light will arrive at various off axis angles at the sensor .. for example always at zero degrees right on the optical axis.
However the CRA is NOT the maximum angle that the light will arrive at the (corner) pixels.
Because , again, the angles between the CRA and the connection of all points on the exit pupil rim to the pixel have to be added.

On the object side, the situation is like this:

The situation is the reverse position of the image side CRA:
Just exchange entrance with exit and object point with image point.

If the sensor is prepared for this , fine.

What happens, when the CRA is too big or too small for a sensor?
When we’re off the acceptable angle of the sensor pixels this light may of may not hit insensitive parts of pixel structures (and we’d get some vignetting) or (likewise unpleasant) the light will land in the neighbour pixel and make it brighter .. which would cost a bit of local contrast.

Sensor manufacturwer often tell you the accepted position and diameter (say, indirectly the cone angle) that the sensor is made for.