Rear converters are lens elements added at the rear of lenses, between lens and camera.
They are marked with a magnification factor larger than 1 : x1.5, x2, x2.5 etc 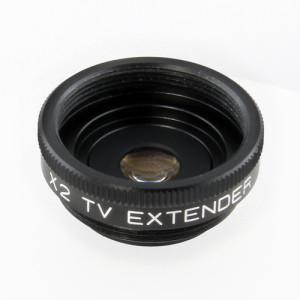 Their intended purpose is to increase the focal length of lenses by this factor, which is roughly equivalent to multiplying the magnification of a lens by this factor.

For now, lets assume we are dealing with a 2x converter. Other magnifications work accordingly.

As magnification is defined by image size divided by object size, there are two ways to double the magnification. This results in two types of rear converters:

Type 1 is useful to obtain a smaller field of view with the same sensor.
Type 2 is useful if you want to change to a larger sensor, while keeping the FOV and the pixel count. Type 2 can be used as Type 1, by simply using it on the old sensor size.

The positive features are:

There are unwanted features, however:

Unexpected features are possible too:

There seem to be more negatives than positives when it comes to using rear converters.
In terms of resolution, we could get the same effect simply through software.

However, type 1 allows an instant smaller field of view without software modifications.
Type 2 of the converter allows the use of larger sensors. Therefore a lens designed for 1/2″ and 1.3 Mega resolution works quite well on a 1″ sensor at 1.3 Megapixels (but not on a 4 Mega 1″ 😉 )

Both types do not need a change in working distance when the converter is mounted.

Many 35mm Lenses work from an MOD  (“minimum object distance”) of 500mm, for example. 75mm lenses often only work from 1.5m MOD. A converter allows you to keep the short working distance, where distance rings would otherwise be needed to increase the distance between  a genuine 75mm lens and the sensor to allow a shorter working distance.