= BFL)
distance on the optical axis between last active optical surface and the sensor when the object is at infinity.

Note:
Not to be confused with the effective focal length EFL!

The difference between the usual color and monochrome – ( ” black and white ” – ) cameras is an additional layer of small color filters , mostly arranged in the so-called ” Bayer pattern ” (patented by Bryce E. Bayer, 1976, employee of Eastman Kodak ) .

See Why can color cameras use lower resolution lenses than monochrome cameras?

= Back Focal Length
= distance between the last optical active surface and the image of objects at infinity that are close to the axis.

A picture taken with a monochrome camera usually has 256 levels of gray.
If the image just has two gray levels, it’s called “binary” image.
An old style fax usually shows a binary image

Here’s a wonderful example of Art based on dichroic filters. 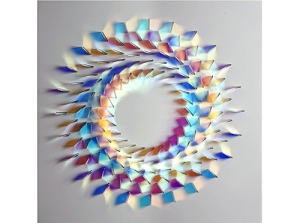 Art based on “dichroic filters”:  “Irdien” by Chris Wood
www.chriswoodglass.co.uk          with kind permission of the artist

We notice that the colors change at different angles of the filters. 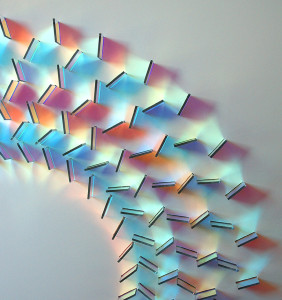 Art based on Dichroic filters : Photo used with kind permission of the Artist: Chris Wood, www.chriswoodglass.co.uk

We notice especially that for filters of the outer circle, filters that  have a 90 degree different orientation have about the same color transmission. Especially look at the topmost, the rightmost (both orange colored) and the top-right-most filter (with a purple touch)

Below is a calculator that gives an idea about the resulting interval of wavelengths (called “band” ) when you use the filter at some angle off the designed incident angle.

The filters above seemed designed for an incident of 45 degrees to the surface. Thus +45 and -45 degrees result in the same color and in between we get a blue shift of the wavelength that pass.

The calculation is just for the primitive case of a rectangular transmission curve.

Bokeh is a word that describes blurry, quite large, often round blobs in the image, often as background of some focussed image part.

As an example see the Bokeh of these lights of a Christmas tree. 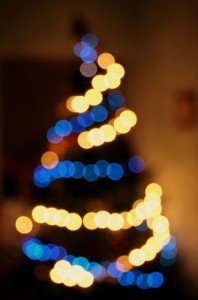 A diagram explains this best :

The lowest large dot on the right is an example for Bokeh. 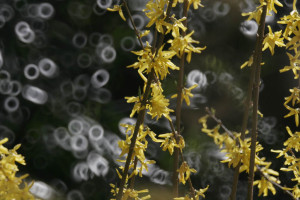 The Bokeh has ring shape here, because the image was taken with by a mirror lens, so that the iris center wasn’t exposed to light.

Standard interface for mounting of lenses.
The diameter of the thread is 1 “(one inch) and there are 32 threads to 1” in length.
The distance between the mechanical stop of the lens and the sensor in air is 17,526 mm

The principle of the camera obscura (= pinhole camera) is like this:

The disadvantage is clearly, that the image on the image plane is very dark. The needed exposure times to take an image can well be minutes!