Mechanical obstacles in the path of light cause a drop in brightness (“artificial vignetting”).

A drop in brightness can also happen unintentionally (and thus may be a design mistake). You can correct it usually by stopping down the lens (smaller the iris opening)  by for example  2-3 f-stops)

Looking from the front to a lens has a certain resemblance to axially look into a cylindrical tube.
At the other end of the tube can be seen a circle, namely, the end of the tube. 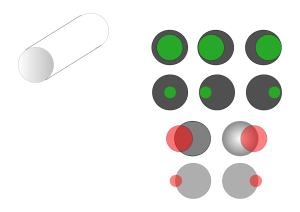 The small green or red circle above suggests doing a stopped-down lens (= lens with a large aperture number).

Tilting the tube (lens) slightly off-center, for some degree a complete circle remains visible ( marked green in the drawing above).
We see, that for small circles (= large f-numbers) the tube (=lens) can be tilted more before the full circle touches the edge of the cylinder.

When we tilt the tube (=lens) (lens) more,  the complete circle is no longer visible,, marked in red.

That fact that the complete circle is visible is a sign that in this direction the entire light can pass through the tube.
The full circle turns into a “biangle” (= intersection of two circles).

This is a sign that in this direction not all of the light can pass the cylinder (=the lens). Vignetting occurs.
The percentage of light passing is

When we connect the image points of a sensor and the corresponding object points, This line has an angular displacement from the optical axis. The angle corresponds to the deflection of the cylinder above.

Mechanical vignetting occurs symmetrically and therefore first occurs in the corners of the sensor.

When we tilt the tube (=lens) too much, no light passes.

The area on the sensor receiving light  is round (due to circular symmetry reasons) and is called  “image circle”.
Black areas are usually to be avoided in the image, say,  the image circle got to be larger than the sensor diagonal.